A Quick History Lesson on Knitting 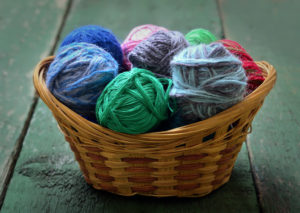 Knitting is a long practiced art that involves interlocking a series of loops and knots with yarn in order to make fabric. Like crocheting, knitting is a very old practice that has always maintained its popularity. Over the years our relationship with knitting may have changed, but it’s always played an important role in our lives.

It is reported that knitting first appeared in the 13th century in England, when soldiers and sailors started to wear caps made from natural fiber yarn to keep warm. Farmers quickly found a decent source of income in the selling of wool yarn to make warm clothing for fishermen and sailors.

Like many things, knitting evolved with the Industrial Revolution. It stopped being so much of a home practice, instead it began to be carried out in factories with fine cotton yarn being spun by cotton gins and looms. This allowed knitting to become much faster and more efficient than simply doing it at home. More importantly, it allowed quality clothing to be mass-produced cheaply by using the same techniques home knitters had used for centuries.

During the Victorian era, knitting became a staple of a well-bred woman. Queen Victoria is even reported to have been a fan of knitting herself. It was during this time that knitting wasn’t just restricted to plan yarn fabrics, but changed to involve bead and lace knitting.

During World War II, when cotton had grown thin in supply, people began to unpick old and used sweaters, in order to use the yarn it was made out of. Women knit uniforms and even bandages for the men on the field. Even after the war ended, wool and cotton continued to be in short supply for a long time after.

In the 70s and 80s knitting was starting to be seen as an old fashioned past time and thus fell out of popularity. Cheaply made and mass produced clothing quickly over took knitting and made the practice virtually obsolete by offering a cost efficient alternative.

However, there has been a recent surge in the knitting movement as of late. More celebrities are showing their love for knitting, which is helping it to become popular. And as things like gender norms are starting to break down, knitting is less and less becoming about being a girly thing to do, and more just about making fun and unique clothing.

Felt Cute, Might Make Later What's more fun to craft when the weather starts to…

Happy Socktober! Many knitters make socks year round, but the month of October has officially…

Have you ever crafted with Shepherd's Shades before? Now that fall is here it's a…

You have already reported this .